A Brief History of The Diocese of San Diego

Priests of the Diocese of San Diego

Priests from other Dioceses:

Permanent Deacons of the Diocese of San Diego

Permanent Deacons from other Dioceses

Active in the Diocese: 9 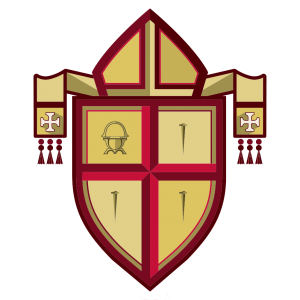 Diego was born to poor Spanish parents shortly before the year 1400. His love for poverty never left him. As a Franciscan brother he was a selfless servant of the poor and was known to heal the sick with the Sign of the Cross, the centerpiece of the diocesan coat of arms.

The Spanish stew pot in the upper left corner indicates Diego’s boundless charity and tireless efforts to feed the hungry.

San Diego had a special devotion to the Lord in his Passion, symbolized by the three nails in the other corners of the crest.

Diego died on Nov. 12, 1463, at the Franciscan monastery in Alcalá, Spain, pressing a crucifix to his heart and repeating the words of the Good Friday chant: “Dulce lignum, dulce ferrum, dulce pondus sustinet.” (Precious the wood, precious the nails, precious the weight they bear.)